Let’s back up a bit to the day I found out I was pregnant.  Here’s my story.

First, a little background information:
Nathan and I had a bet.  Nathan was determined it would take us one month to get pregnant.  He strongly believed he would be efficient in getting the job done.  Now, it isn’t that I didn’t believe in my husband but you have to know that I have an irregular ovulation cycle and the doctor had told me years ago that while it takes the average couple about one year to get pregnant it might take me up to three.  So, I didn’t see it happening in one month, these things take time.  We had decided that if we had it our way we’d get pregnant in September.  Nathan wanted to start trying in September (it was only going to take us a month in his mind so it made perfect sense: have a lot of unprotected sex in September, get pregnant in September.)  I just knew it would take us longer and wanted to start trying in the Spring.  So we compromised and decided we’d start trying in July.  This conversation took place while Nathan and I were out on a date after I passed my Washington State Teaching Certification tests.  It was May.  I stopped taking my birth control to let it get out of my system and we stopped being so careful.

June 6, 2011.
I was 3 days late for my period.  I didn’t really think a whole lot of it because truth be told my period never started at the same time in the month.  I have a very irregular cycle so I didn’t even really consider myself “late.”  A gal in my book club, who is a nurse for Dr. Berg, had told me to buy pregnancy tests at the dollar store because they do the exact same thing as the $14 First Response tests.  It was my first day of summer break so my best friend Lacie and I were out running around.  We stopped by the dollar store and I picked up a couple boxes of the $1 pregnancy tests just to have some.  When I got home I thought, “Hmm I could be a few days late…why not take a test just to confirm that I’m not pregnant so I don’t have to ponder that option.  After all, the test was only $1!”  So I pee’d in a cup, used the little dropper to drop a little bit of pee on the stick and walked away.  I started picking up the house, gathered laundry, and then went to check my stick totally expecting to see only one line (a negative result.)  What I saw was this: 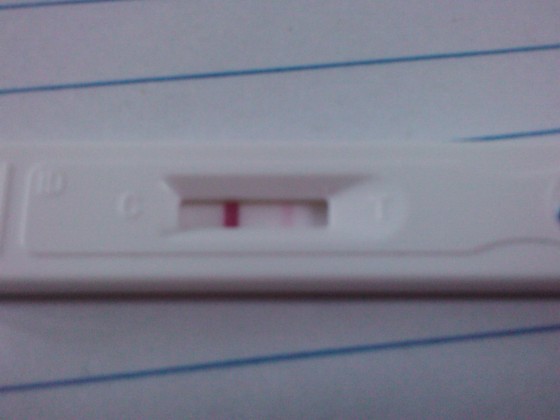 I picked up the test and looked really closely at that faint second line.  At first I wasn’t sure if I was just seeing things or if that faint little line really was there.  Then I wondered if that even counted.  I was in disbelief.  I mean, this test was from the DOLLAR STORE!  There was a good chance it was wrong.  I immediately went to Albertsons and grabbed a First Repsonse.  This time I was really nervous during those two minutes that I waited for my test results.  This time I saw this:

Uhm, yep that is definitely two lines!!  My heart was racing but I still just wasn’t convinced.  I couldn’t be pregnant…Nathan and I weren’t even trying yet!  Back to Albertsons I went.  I needed to see the word “pregnant” so I bought a digital read out test.  By now it was already 4:45 and Nathan usually gets home between 5:00-5:30.  I was running out of time.  I was also running out of pee.  I started to chug water and pushed out as many little drops as I could onto my third stick.

No mistaking that one.  I was happy, excited, nervous, anxious, scared, and over-joyed all at the exact same time.  This lasted about 5 seconds and then my mind was consumed with “How am I going to tell Nathan?!  What will he say?  What will he think?”  I immediately started making his favorite dinner, spaghetti.  Then I wrapped the pregnancy test in a heart-shaped bag and hid it in the closet.  When Nathan got home I put on an Oscar-worthy performance acting as normal as possible when inside my blood was running through my veins and my heart was about to pound right through my chest.  We sat and ate dinner together and talked about normal work day things.  I was surprised Nathan hadn’t noticed the fork shaking in my hand as I took each bite.  Finally he was done eating so I made a move before he could leave the dinner table and grabbed his gift.

He had a worried expression when he saw it and said, “Did I forget something? What’s this for?”
“It’s just because I love you,” I told him.  He unwrapped the positive pregnancy test, looked at it in his hands, then looked up at me and said, “Really?”  After I nodded yes his exact words were, “I TOLD YOU SO!” (See why the background information was important now…you have to understand that my husband is extremely competitive so the first thought to enter his mind when he found out I was pregnant was that he was RIGHT! It only took us one month to get pregnant.)   Neither one of us could stop smiling.

I grabbed the calendar and looked over the dates of my last period and my first positive pregnancy test.  I also looked at days Nathan and I hadn’t been very careful and concluded that the very FIRST time we ever had 100% unprotected sex (in the 6 years we’ve been together) I got pregnant.

We hadn’t been “trying” yet and it took both of us by surprise…but we both landed on cloud 9 that night. =)